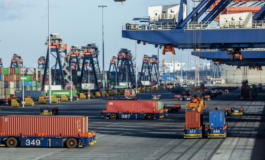 The authors propose a multi-criteria decision-making (MCDM) framework using four ship categories as alternatives and eight criteria for competitiveness evaluation. We analyse collected data using the Best–Worst Method (BWM), one of the recently developed MCDM methods. The findings reveal that operating expenses, navigation aspects, and environmental protection are the three most important criteria for deploying autonomous ships in the Arctic route. Among the three investigated autonomous ships alternatives, the semi-autonomous ship operated from a shore control centre (SCC) is prioritized for Arctic shipping in the foreseeable future, when benchmarked against the conventional ship. The SCC-controlled semi-autonomous ship alternative is competitive in the majority of the considered criteria including operating expenses, capital expenses, navigation, ship-shore and ship–ship communication, search and rescue, and environmental protection.

The open-access study has been published in the scientific Journal of Marine Science and Technology and can be accessed via the journal’s website.